Shaki – one of the oldest cities of not only Azerbaijan but also the entire Caucasus, many findings on its territory date back over 25000 years.

Shaki is located 380 km west of Baku, in the picturesque mountainous region, rugged by narrow gorges and green valleys with many springs, pristine rivers, waterfalls and mineral springs, framed by lush forests and alpine meadows.

A health resort Markhal is located near Shaki, in one of the most beautiful and picturesque places in the country. In addition, in Shaki there are many historical and architectural attractions.

Not only the pride of the ancient Shaki, but also the most outstanding and valuable monument of Azerbaijan – the Palace of Shaki Khans, built in the XVIII century without a single nail (all the elements are mounted using a special solution, the recipe of which is lost forever) with magnificent wall murals and stained-glass windows in the stone citadel.

Unique in its beauty two-storey building of the palace impresses with splendor of its decoration, both external and internal. The facade of the palace is richly painted with motifs drawings that display scenes of hunting and war, as well as the intricate geometric and floral patterns.

In the center flaunts a huge stained-glass window of colored glass mosaic. It is interesting that 1 square meter accounts for up to 5,000 pieces of glass.

By the way, on the territory of the palace there is a Khan’s Chinar tree, the age of which is estimated at about 5 centuries. Its circumference is 11.5 meters, and height – 34 meters.

In the oldest village of Azerbaijan – Kish, near Shaki, there is a unique monument of antiquity – ancient Albanian temple, which dates back to I century AD. According to historians, the temple was founded by Apostle Eliseus, who brought Christianity to Albania.

People also make a pilgrimage here to make a wish. To do this, they throw a coin in a special niche, or apply a coin on one of the walls if it sticks, wish will come true. In the courtyard of the temple there are several ancient tombs, covered with a transparent plastic dome. Apparently, here are buried the servants of the temple, or holy men, who have earned the right to be buried in the house of God. Particularly noteworthy is the fact of the height of the buried people – not less than two meters. Scientists and researchers who have studied the skeletons found here came to the conclusion that they belong to people with blond hair and blue eyes.

Shaki has long been famous as a city of artists, artisans and merchants. It gathered merchants and traders from the countries of the Great Silk Road. There are Isfagan, Tabriz and Lezgin caravanserais of medieval Shaki, preserved to this day in excellent condition. The most significant of them – the Upper and Lower caravanserais – were built in the XVIII century.

Caravanserais were built with taking into account the comfort of all merchants and the safety of their goods. Already then masters sought to provide decent service to guests – merchants stacked their goods in the cellar, traded on the ground floor and lived on the second. Traditionally caravanserais had gates on either, or even on all four sides. When they were closed, caravanserais transformed into a fortress.

The city center has a lot of old stone houses with tiled gabled roofs, high verandas, and inner courtyards, behind blind brick or rubble walls.

Shaki has long been famous for its colorful silk women’s scarves – “kelagayi”-which are in great demand all around the world. Here operates one of the largest silk factories and also the silk-spinning and silk-weaving factories. 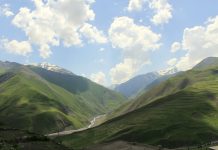 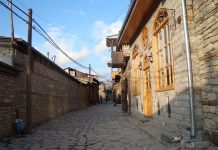 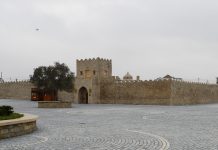